You are here: Home1 / Gaia Trust2 / About Gaia Trust

Gaia Trust is a Danish-based charitable association founded in 1987 on the initiative of Ross and Hildur Jackson, with the intention of supporting the transition to a sustainable and more spiritual future society through grants and proactive initiatives.

Gaia Trust has always been self-funded by earnings from its very successful daughter company Gaiacorp, a foreign currency manager and advisory firm. The basis for Gaiacorp’s business was software and research donated to Gaia Trust by operations researcher Ross Jackson, who retained 10% of the shares for the first five years. The announced intention from the beginning was to sell off Gaiacorp after about 10 years in order to free up capital for the charitable activities, and this sale was indeed completed in 2000.

Gaia Trust’s strategy has always been two-pronged with yin and yang components. The yin component was to support the ecovillage movement through grants, while the yang component was to invest its capital in “green” startup companies that would complement the grants policy, creating jobs and promoting more sustainable businesses.

The major projects resulting were the establishment of the Global Ecovillage Network and venture capital firm Gaia Technologies A/S. Over 300 grants have been made to projects in over 30 countries. One of the key concepts was to support the first permaculture course in a number of countries.

It was always Gaia Trust’s intention to use up its capital while the founders were still active, and this policy has been followed. Today, Gaia Trust no longer accepts grant applications, as available funds have been reduced substantially after using over $20 million in carrying out its objectives. Gaia Trust will continue to support smaller projects on its own initiative and maintain its website.

Gaiacorp was for many years the source of funds for the Gaia Trust grants and Gaia Tech investments in green start-ups, until it was sold off in 2000. The intention always was to sell Gaiacorp after about ten years and use the funds tied up there in the general Gaia Trust grants program.

Gaiacorp’s major business was the management of a line of mutual funds based on the concept of currencies as an investment category. This was a quite new concept in 1987. Gaiacorp launched one of the first hedge funds to specialize in this particular category. Currency funds had existed prior to 1988, but they were typically ungeared simple bank deposit funds. Not very exciting! There were also a small number of hedge funds that dealt with currencies more aggressively, but they typically dealt with stocks and bonds and commodities as well. When they traded currencies it was typically in the few that were traded on US futures markets versus the US dollar. Very few dealt in cross-currencies (i.e. no dollar component) or currency options. When they did, it was typically the listed variety based on the US Dollar and traded on the Chicago Options Exchange, and those who traded were mostly US-based. 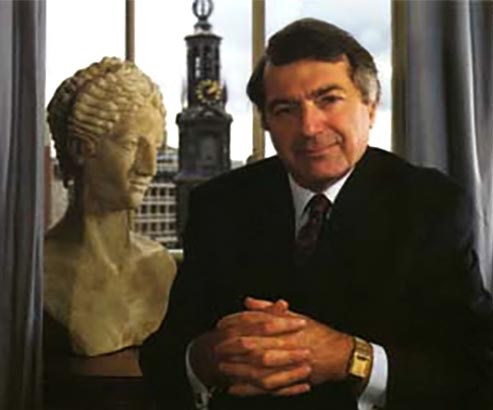 Gaiacorp was unique in that it never traded listed currency options or listed currency futures, which are basically commodity contracts. Everything was done in the so-called OTC (“over-the -counter”) market, which in practice, meant dealing with the small number of large international banks that make markets in any currency pair or currency option, including cross trades that are not dollar-based, and at any price levels for options. Most of these are based in London, and it was naturally there that Gaiacorp established its head office.

The reason for Gaiacorp’s different profile was undoubtedly the unusual background of the initiator, Dr. Ross Jackson. He was North American-educated but European-based, and looked at currencies from a more global perspective than his colleagues across the ocean. Many of his clients were Sterling or Danish krone-based, and they needed tools that looked at the market from their particular perspective. Prior to his researching the foreign exchange market in the early 1980s, Ross had been a consultant in international investment to a number of European financial institutions, advising on the portfolio approach to investment in shares and bonds. But he also had a background in options from his Ph.D. thesis back in 1964.

Being an Operations Researcher, once he set his mind to it, his approach was to do a very thorough two-year research study first, consider unorthodox possibilities, and ultimately find the optimal way to trade currencies. He concluded his study with the ultimate test by trading in the market with his own money for two years in 1984-1986. His studies resulted in the unique Gaiacorp approach, which was an original, highly mathematical portfolio optimization of both long and short positions in a range of currencies and currency options. The basic selling point for investors was for them to diversify risk by investing 10-20% of their savings in a product that was independent of stock and bond markets and yet had an attractive expected return. It was a hard sell initially because the concept was so new. But a number of institutional clients who knew Ross personally, backed him, and many smaller private investors soon followed.

Gaiacorp had a spectacular record from 1988-1992, making front-page news in the Wall Street Journal and the International Herald Tribune, with characteristically volatile swings, mostly upwards. The head trader – Bernard Lietaer, was named the “currency trader of the year” in 1989 based on his success in using the system. The high flying, most volatile Gaia fund once raised eyebrows by increasing 86% in a single month! At one point, Gaiacorp was rumored to be the largest buyer of currency options in the world, buying at the rate of about $2 million per day in premium outlay.

But Gaiacorp’s funds were hurt by the EMS devaluation crisis in 1992 and lost heavily subsequently. The nature of the market shifted thereafter. Gaiacorp’s specialty of cross-currency trading became far less attractive as interest rates converged, liquidity dried up and spreads increased, while option sellers caught on to Gaiacorp’s strategies and changed the way they priced options in a counter move. Gaiacorp had to reinvent itself. Gaiacorp recovered, but never achieved the same spectacular results again. In retrospect, it was hurt by the historic one-way stock market boom of the 1990s. A good old-fashioned bear market would have made the advantages of the strategy of diversifying into currencies much more obvious. While fund performance was fairly good, but not spectacular, Gaiacorp’s real-time all-client currency overlay track record (advising corporations on when to cover their currency exposure and when not to) remained the best in the world throughout the 1990s, beating neutral strategies of no cover or always cover by about 2% per annum. Most importantly for Gaia Trust, it was a financial success, contributing over $20 million to the charitable program. In 2000, Gaiacorp was sold to the Appleton Group of South Africa.

Soon after Gaia Trust was established in 1987 two daughter companies, Gaiacorp and Gaia Technologies were incorporated. All three units had a common goal – to work for the development of a more sustainable, more spiritual world.

Thus all three entities were part of an integrated strategy for transformation.

The green innovators, to supplement their visions and ideas about ecology and sustainability, have needed not only Gaia Tech’s capital, but also its know-how in financing, marketing and management. It was never Gaia Tech’s intention to profit on its investments, but it did hope to break even.

Looking back a decade later, we must conclude that Gaia Tech did not live up to expectations. It turned out to be far more difficult than anyone imagined to help these struggling companies thrive, or in many cases, even to survive. There were just too many barriers. One was the slow acceptance of organic, healthier foods in the general populace, which preferred to purchase cheaper lower quality foods, even though Danes use a smaller percentage of their budget on food than most countries.

Another was the complete lack of government support. For example, Ross Jackson has, for years, pointed out the advantages to society of putting a lower VAT on organic foods (say, 15% instead of 25%) to promote health. The loss of revenue would be more than made up by decreased health costs and shorter queues at our hospitals. There is little doubt that many of our illnesses are related to unhealthy diets.

A third factor was a decided lack of professionalism amongst the pioneers, whose hearts were in the right place, but whose business skills were inadequate.

The bottom line is that Gaia Tech lost over $10 million supporting these companies, including operating costs and administration, and had to cease new investments in 2000. It also turned out to be very difficult to create jobs at ecovillages as the Gaia Tech companies were rarely situated in the same places as the ecovillages for various reasons.

On the plus side, we can say that most of the companies have survived in one form or another, several in the form of employee-owned firms, where Gaia Tech handed over its shares to the management. Also the program has been an inspiration to many and attracted a good deal of attention and praise from the people who are trying to move society in a more sustainable direction.